Our Jewish Book Club met to discuss “Letters to My Palestinian Neighbor”, which the Wall Street Journal calls a “profound and original work”.

Uncharted Territory: When Ohel Leah Had a Reform Rabbi

More than half a century ago, in the midst of a severe water crisis in Hong Kong, Rabbi Ferdinand M. Isserman (1898-1972) became the rabbi of Ohel Leah Synagogue. The first Reform rabbi to serve in Hong Kong, Rabbi Isserman’s tenure lasted for most of 1963. In a short period of time he raised the community’s profile and pushed for significant ritual changes.

Drawing on archival material, Rabbi Asher Oser uncovered why the Synagogue employed Rabbi Isserman, the changes he wished to institute, and his interaction with different community members. This forgotten chapter of Hong Kong’s Jewish history presents a complex portrait of a community that strove for peace and tradition, and was sometimes open to new experiences, as it moved forward.

Our Jewish Book Club met to discuss “The Secret Book of Kings”, which Elie Wiesel called “a riveting novel based on textual sources about the experiences of David and Solomon”. 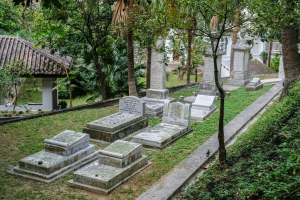 Our Howard Elias took us on another tour of this fascinating part of Hong Kong’s history.

Howard shared the stories of some of the cemetery’s more notable residents, which includes members of the Kadoorie, Belilios, Sassoon, Odell and Weill families, as well as some amazing stories about a few people you may have never heard of. He also discussed religious laws and customs regarding burial, and the work the Ohel Leah Synagogue Charity has undertaken over the past decade to maintain the cemetery grounds.

“We attended the Jewish cemetery tour today and wanted to say thank you. It was fascinating. Thank you so much for sharing your passion. The hard work and time you put into the research is truly appreciated.” – Jackie

“I want to thank you for the visit you organised last week of the Jewish cemetery of Hong Kong. My wife and I found your explanations and numerous anecdotes fascinating.” – Fabrice

“I would just like to drop you a big THANK YOU for taking time yesterday and doing the tour for the public on a Sunday. It was very informative and it was such a valuable lesson for me. I will definitely take my nephew when he’s older in a few years’ time. I had heard of names like Kadoorie, Sassoon, Belilios since I was a kid in HK but little did I know of the stories that lay behind them… now I know, so thank you! I’m glad that there are still people like your good self to delicate their time and effort to study, preserve and promote their own heritage and culture to the public, thanks!” – Maggie 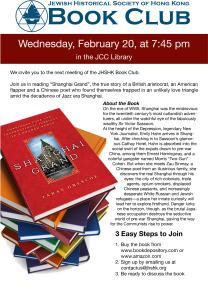 Our Jewish Book Club met to discuss “Shanghai Grand”, the true story of a British aristocrat, an American flapper and a Chinese poet who found themselves trapped in an unlikely love triangle amid the decadence of Jazz era Shanghai.

Jewish Book Club: “If All the Seas Were Ink” 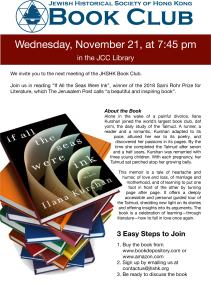 Our Jewish Book Club met to discuss “If All the Seas Were Ink”, winner of the 2018 Sami Rohr Prize for Literature, which The Jerusalem Post calls “a beautiful and inspiring book”. 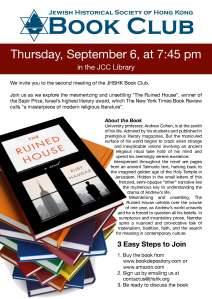 Our Jewish Book Club met to discuss “The Ruined House”, winner of the Sapir Prize, which The New York Times Book Review calls “a masterpiece of modern religious literature”. 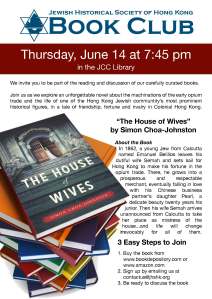 Our Jewish Book Club kicked off with “The House of Wives”, an unforgettable novel about one of our community’s most prominent historical figures.

The Jewish Historical Society of Hong Kong and the United Jewish Congregation of Hong Kong welcomed Dr. Dan Ben-Canaan to Hong Kong to speak to the community about the Harbin Jewish Community and its history.

“A General Introduction to the History of the Jews of Harbin, and the Effort to Preserve This History”
“Engineering History – The Reconstruction of the Harbin Old Synagogue: A Case Study in Interpreting and Engineering a Past”

Dr. Dan Ben-Canaan is perhaps the world’s foremost authority on the history of the Jews of Harbin. In 2009, while at the Heilongjiang University of Western Studies, he authored a book entitled “The Jewish People and Their Place in History – The Jews of China and Harbin”. Along with his wife, Dr. Ben-Canaan established the Harbin Jewish Culture Association in late 2014. The Sino-Israel Research and Study Center is now under the umbrella of the Harbin Jewish Culture Association. After 14 years of lecturing at Heilongjiang University, Dr. Ben-Canaan moved to Northeast Forestry University, one of China’s top science institutions, where he teaches postgraduates, PhD candidates and faculty the methodologies of research and academic writing.

Read about the talks as reported in the Jewish Times Asia.

Recalling Jewish Calcutta: Memories of the Jewish Community in Calcutta

Considering the modest size of the community, the Calcutta Jews left a sizeable footprint. There are three impressive and large synagogues, two schools, and a cemetery. Ezra Mansions and the Ezra hospital, the iconic Nahoum’s Confectionery, and two buildings in the zoo that were endowed by Jews still bear Jewish names. There is the Belilios Street, Ezra Street and Synagogue Street. Many other mansions, residences and office buildings still stand though they no longer bear their Jewish names. Today, there are barely thirty Jews left in the community, most being very elderly.

This exhibition was presented by Yael Silliman, who is undertaking an oral history project to record the impressions and knowledge of those people who were familiar with Jews in Calcutta. To access these oral histories, she is working with a cross-section of communities in Calcutta including Armenians, Christians, Muslims, and Hindus who were closely connected to the Jewish community. These oral histories will provide the basis for writing a paper that Ms. Silliman will submit to academic journals and use to enrich the digital archive she has developed entitled Recalling Jewish Calcutta.

Listen to Phil Whelan talk with Jael Silliman about the Jews of Calcutta on RTHK Radio 3’s Morning Brew.

Restoration of the Ohel Leah Synagogue

Dr. Glenn Frommer presented the story of the restoration of the Ohel Leah synagogue in 1997, with previously unpublished photographs.

Local historian Jason Wordie took a group of 30 members of the JHS on a walking tour of Hong Kong’s Western district.

A group of 20 members visited India for a week, spending Shabbat with the Jewish Community in Mumbai, and visiting the community in Cochin.

Jennifer Roth, Senior VP and Head of the Judaica department at Sotheby’s New York, spoke about the collection, which illuminates the sweep of Jewish history from the medieval world to the present. 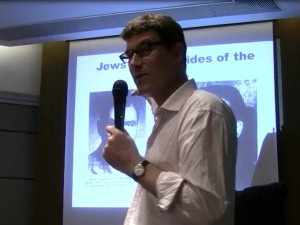 Paul French, who participated in the recent Hong Kong International Literary Festival, presented his novel “Midnight in Old Peking”. While researching for this book, French came across some interesting stories, quite unrelated to his subject, which he felt deserved to be told.

Why are the Chinese so interested in the Jews?

Professor Xu Xin, director of the Centre for Jewish Studies at Nanjing University, spoke about this subject that is both interesting and curious.

The JHS organised its first overseas trip to Harbin in mainland China.

Escape — Survival — Resettlement: The Jews in Shanghai and Hong Kong: The Lost Records 1938-1950

The Hong Kong Heritage Project, established by Sir Michael Kadoorie, together with the JHS, presented a rare opportunity to delve into the rich history of Jewish life in Shanghai and Hong Kong during and immediately after World War Two. Through the use of unique and recently discovered records, oral histories, photos and film, history came alive for this original exhibition that celebrates the courage, forbearance and determination of a small group of people swept up in the turmoil of a changing world.

Lecture on the Kaifeng Jewish Community

Dr. Maisie Meyer traced the history of a community of Jews, mainly from Persia and Yemen, who arrived in China in the 12th century with the great caravans of the ancient Silk Road and settled in Kaifeng, the capital of the Northern Sung Dynasty. At its peak, there were about 1,600 Jews who made up the vibrant, thriving orthodox Sephardi community but, over time they became isolated from other centres of Judaism and gradually integrated into Chinese society. By the early 17th century, except for their religion, they had become indistinguishable from the Chinese population. Abject poverty, the death of their rabbi and the destruction of their synagogue in a great flood reduced them to selling their Torah scrolls and religious artifacts in the early 19th century. Dr Meyer, will poignantly describe how, in the early 1900s the Shanghai Jewish Community endeavoured to bring the remnant of these Kaifeng Jews back to the religion of their forefathers.

Dr. Meyer has lectured widely on Baghdadi Jews in the eastern Diaspora and has presented papers on the subject worldwide. She has published numerous authoritative articles in prestigious journals and her book, From the Rivers of Babylon to the Whangpoo: A Century of Sephardi Jewish Life in Shanghai is into its second printing. Book reviews have heralded it as the definitive history of the Baghdadi Jewish merchants who settled in Shanghai in the mid-19th century.

The JHS hit the road (so to speak) with a general interest historical walking tour of Happy Valley and Wanchai, jointly led by our vice-chairman and historian, S. J. Chan, and well known local historian, Tim Ko.

From the Rivers of Babylon to the Whangpoo: A Century of Sephardi Jewish Life in Shanghai

Dr. Maisie Meyer discussed how a small number of adventurous Baghdadi Jewish merchants began settling in Shanghai in the mid-19th century and organised a vibrant community that maintained itself with distinction for a century.

Her exciting journey described how, in this faraway outpost of the Jewish diaspora where the community never numbered more than a thousand people, the Baghdadis accomplished a great deal.

Dr. Meyer also discussed how the humanitarian efforts of the Shanghai Baghdadi Jews in accommodating some 20,000 victims of Nazi persecution reflected further credit on this remarkable community. She touched upon the Japanese occupation of Shanghai during World War II and the city’s subsequent incorporation into the Peoples’ Republic of China and how the Jews felt pressured to leave the country and scatter across the globe.