This exhibition is available for display. Please contact us for more information.

With the rise to power of the Nazi party in Germany in 1933, a series of rabidly nationalistic, anti-Jewish and racist policies were implemented. In 1935, the Nuremberg Laws formalised this discrimination and stripped the Jews of their German citizenship.

On 10 November 1938, in a thinly veiled act of retribution triggered by the assassination of a German ambassador by a young Polish Jew in Paris, the Nazis unleashed a night of unbridled terror and destruction on Jewish communities across Germany and Austria. What was to become known as Kristallnacht (the Night of Broken Glass) saw Jews violently beaten, shops looted, synagogues destroyed, and 30,000 Jewish men and boys rounded up and sent to concentration camps.

Kristallnacht delivered the final, devastating realisation to the Jews. Nazi Germany was no longer a place they could live.

Known as “The Paris of the Orient” and a “Paradise for Adventurers”, Shanghai was to provide an unlikely refuge for tens of thousands of Jewish refugees escaping the horrors of Nazi Germany. At a time when all doors were closed, Shanghai was one of the only places in the world which did not require an entry visa.

Shanghai already had an established Jewish presence – Baghdadi Jews such as the Sassoons, Ezras, Hardoons and Kadoories had lived in Shanghai since the 19th century and were successful merchants. There was also a sizeable community of Russian Jews who fled to Shanghai in the 20th century following the 1905 anti-Jewish pogrom and the Bolshevik Revolution of 1917.

Thousands of Jewish refugees from Germany and Austria arrived at the free port of Shanghai after a long voyage by sea, leaving loved ones and the only country they had ever known behind. They were forced to forfeit their homes, their businesses and almost all of their belongings, coming to Shanghai with nothing.

As refugees flooded in, the established Jewish communities in Shanghai rose to the challenge, immediately fundraising and organising committees to deal with the refugee community’s most urgent needs. Horace Kadoorie established the Shanghai Jewish Youth Association (SJYA) which funded tuition, created employment opportunities for young Jews and organised summer camps. Laura Margolis, the first female agent for The American Jewish Joint Distribution Committee (“the Joint”), helped save the lives of thousands from starvation through her sheer tenacity and chutzpah. 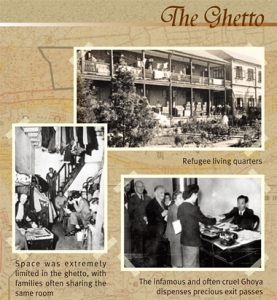 In 1937, Shanghai was occupied by Japanese forces. Japanese policy towards the Jews was generally ambivalent, but on 18 February 1943, the Japanese officially announced that within one month, all stateless refugees who had arrived later than 1937 were to be rounded up and forcibly relocated to a restricted area in the city’s Hongkou district. Hongkou was a crowded, squalid area of less than one square mile. Virtually overnight, the population in the ghetto swelled to bursting point. Life was heavily restricted, with a pass system controlling the refugees’ movements.

Despite these privations and the hardship that existed – including epidemics, malnutrition, inflation and the difficulty of finding employment – the refugees made the best of what they had. Many survived through sheer grit and determination, and cultural life flourished due to the creativity and hard work of the refugees, helping many survive the dark days of the ghetto.

With the Japanese surrender in 1945, the Second World War came to an end. Shanghai was finally liberated and everyone rejoiced. Jubilation, however, was short-lived, as the refugees learned of the horrors that had befallen their family and friends in the Nazi death camps of Hitler’s crazed Final Solution.

For the Jewish refugees, emigration was the only option. There was nothing to go back to in Europe, and Shanghai was but a temporary refuge from Nazi-controlled Europe. They made preparations to leave Shanghai. It would be a city they would never forget and a people to whom they would remain eternally grateful.

Although ravaged and war-torn by the Japanese Occupation of 1941–1945, post-war Hong Kong and its people played an integral part in helping the refugees start anew.

Hong Kong provided a transit port and a base through which to process visas – often a difficult and lengthy process. The Peninsula Hotel helped by providing the refugees with much needed accommodation during the acute housing crisis. Hong Kong’s Jewish Community, though battered by the war, pulled together for the necessary paperwork, luggage handling and logistics needed to help the refugees start new lives and homes, whether it be in the United States, the newly established State of Israel (1948), Australia, the Soviet Union, Europe or South America.

Shanghai granted safe haven to the Jewish refugees at a time when all doors were closed and no other country would accept them. This single act of generosity allowed tens of thousands of Jews to escape certain death in the Holocaust, in which 6 million Jewish men, women and children were killed.

Exhibition photos were kindly provided by:

The Jewish Historical Society of Hong Kong (JHS) was established in 1984 and holds an impressive Sino-Judaic reference library believed to be the most comprehensive in Asia. The JHS has published numerous books and monographs; has compiled extensive records of the Jewish cemetery; and is conducting a series of interviews of longtime members of the Hong Kong Jewish community.